What better way to celebrate the Inside Out movie than a fun and entertaining kids’ games app? From the creators of Where’s My Water? and Frozen Free Fall comes Inside Out Thought Bubbles, a tie-in app to the latest Disney animated blockbuster. If your child is a bubble shooter fan or an Inside Out movie buff, then this game is the best way to keep him/her engaged and entertained. This game is appropriate for kids above the age of 6.

The app has one of the most popular genres of the Google play store, the bubble shooter, as its theme and is meant for children above the age of 6. The app uses different emotions from Riley’s head and the player has to match the emotions and shoot them. Here is a detailed app review.

What’s Good about this Android App? 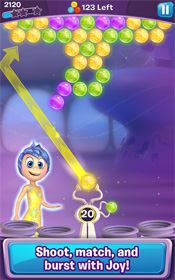 Inside Out Thought Bubbles is a tie-in game app, designed within the movie environment. It is a classic arcade style bubble shooter game, where the player has to match the emotions and shoot them to clear them. There are a total of 125 levels and four game modes to choose from. The original characters from the movie have also been used. As the player moves forward in the game, s/he travels across various destinations from the film, including Family Island, Dream Productions, Imagination Land and more. 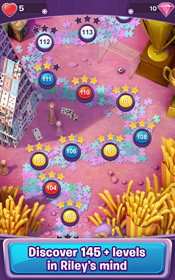 The game initially starts with Joy, one of the protagonists in the movie, but the player can unlock other characters as s/he moves up the levels. Each character has special powers. For instance, Joy can create a sunburst, Anger lets out a fireball and Sadness can bring clouds. There are power-ups and boosters that help a player to get through obstacles like Brain Freezes and Jump Ahead. Watching a trailer or a clip from the movie also earns the player power-ups that can be used during game-play. 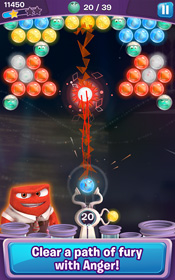 This Android app also has a rationing method, where you need to buy gems when you run out of lives. Alternately, players can wait it out and the app will regenerate the lives in some time. The game also boasts 3D graphics and sound straight from the movie. Although the game doesn’t have any learning features for kids, it sure can keep your child busy and entertained.

What’s Missing in Inside Out Thought Bubbles?

Although play is pretty simple, some levels can be tough to clear, as you move through the game. Eventually, a player runs out of power-ups and boost ups, and has no choice but to buy gems or otherwise remain stuck. And, the in-app purchases could be quite expensive. The game is no different from other bubble shooter games, except for the characters and the movie backdrop. The Android app also has links to social media, third party advertisement, as well as Walt Disney advertisements and links to online stores for the purchase of real products, which makes it mandatory for parents to keep an eye on the activities of their child.